Many of the biggest football players in the world began their careers from humble beginnings. Whether we’re talking about social class or looks. Christians Ronaldo isn’t any different with pictures of him in his young days resurfacing on the internet.   It’s obvious that Ronaldo’s teeth and smile have had some cosmetic dentistry done.

Cosmetic dentistry has almost become a necessity and people of all classes are seeking it even more than cosmetic surgery. Almost all the smiles we see on TV of a-listers and celebrities aren’t natural.

Older picture of superstar Ronaldo show he’s had a drastic transformation in his appearance. Most notably his smile.

Ronaldo’s teeth had a few issues which we’ll discuss separately below along with the treatments he had to fix them. 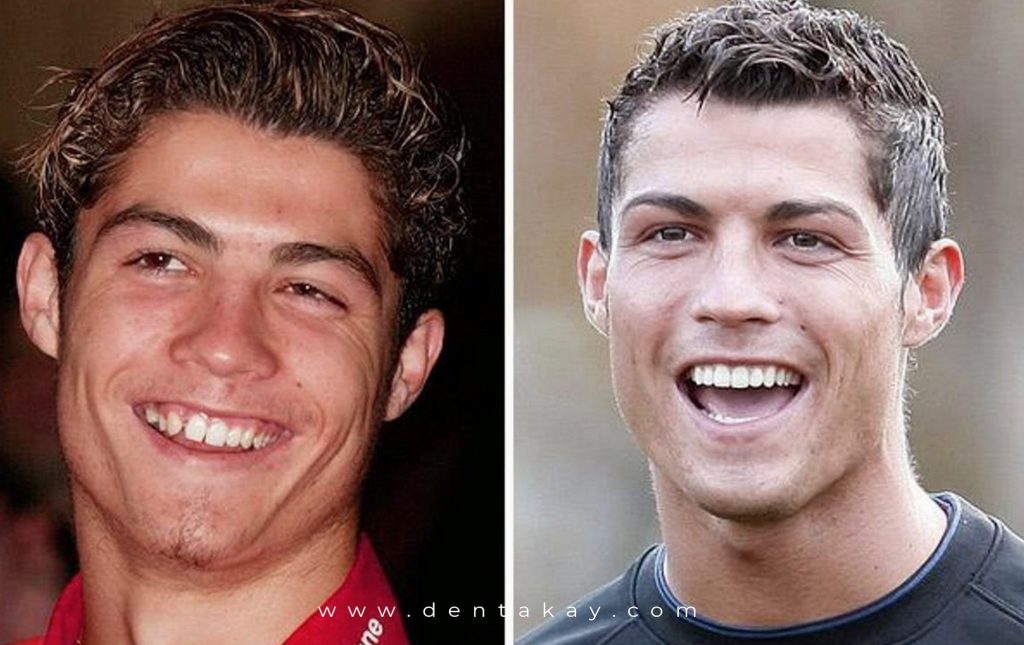 As his career started taking up, Ronaldo has been seen in ceramic braces. These type of braces are typically hard to see and made of materials that match your tooth enamel. Regardless, his braces were slightly visible in some pictures.

So, this was the first journey for Ronaldo’s teeth and smile towards perfection.

There are more modern orthodontics treatments such as bilingual braces which go behind the teeth for a chameleon effect. You also have the option of Invisalign which is a removable option if invisible braces.

Ronaldo’s teeth were eclipsed by overexposed gums. But as we can see now his gummy smile is no longer an issue. It’s hard to tell if Ronaldo’s gummy smile is the result of a hyperactive lip muscle or overgrowth of gum tissue.

In today’s modern dentistry, you can treat a gummy smile from a hyperactive lip muscle with botox injections. Whereas overgrowth of gum tissue no longer needs surgery, and you can fix it with a non-invasive laser.

But in the case of Ronaldo’s teeth he’s had to opt for surgery. Which was a more common option back in the day.

Pre-cosmetic dentistry, Ronaldo’s teeth had a missing upper right incisor. It’s not clear whether this tooth was hidden or entirely missing. But if just out of site, braces probably brought it back into alignment.

Although, it’s more likely that it’s entirely missing and Ronaldo had it reversed with a dental implant. It is possible that midway through his orthodontics treatment, Ronaldo enough space for his implants.

Ronaldo has teeth whitening as well given his smile was very pigmented. Teeth whitening is a very fast-acting solution to give your smile brightness. Although, it’s not suitable for smokers and coffee addicts because you’ll likely rebuild stains.

But Ronaldo is a footballer for a big club, so he’s likely to be on a very healthy lifestyle. Which makes him suitable for this procedure.

For his final smile makeover, it looks like Ronaldo had veneers. This is likely because the procedure has started to gain widespread acceptance in the field at the time. Veneers are a good option for smokers as well because it doesn’t dim down with stains or change shape easily. So it’s almost a permanent solution that can stay up to 20 years. According to research, 91% of all veneers have a survival rate of 20 years with decent care. With veneers, he wouldn’t have had to go through all these procedures.

Perhaps only the gummy smile and dental implant treatments. Other than that, veneers can help you skip teeth whitening and orthodontics.  Especially in the case of Ronald teeth which weren’t extremely crowded. Therefore, he didn’t need orthodontics beforehand.

Veneers are the most popular Smile treatment, and they come as small shells that are perfectly aligned, color-matched, and shaped to be most compatible with your features. Celebrities, in particular, get their veneers, also known as the Hollywood Smile, done by seasoned dentists. Hence, why despite the fact that most celebrities have veneers their smiles don’t look the same.  This is the approach that our dentists at Dentakay use to give our patients unique smiles.

Did Ronaldo Get Any Other Procedures?

The change is big in his appearance. But it’s really all down to cosmetic dentistry. Getting the right smile and improving your oral health can do wonders for your proportions as is the case with Ronaldo.

He’s also had better hairstyles since the picture and skin treatments as well. So this goes to prove that good looks are down to minor tweaks.

Ronaldo’s teeth makeover may have cost him thousands of dollars. But he also got it in a time when cosmetic dentistry wasn’t popular. Or when health tourism wasn’t a thing. But now you can get the same Ronaldo’s teeth transformation for an affordable price. Our experts at Dentakay offer high-quality treatments for very affordable costs. You can view our before and after pictures here.

Many of our patients at Dentakay come from Europe or the USA where cosmetic dentistry procedures are most expensive. And they seek us not because of affordable costs but for the quality we serve and the services we provide to international patients.

$399 Dental Implants: Where Can You Get Them?

Mini Dental Implants: Everything You Should Know

All On 4 Dental Implants Cost, Results, and Pictures